It’s been a beautiful week in Detroit. The city, the people–literally everything was so welcoming. This was my first full NABJ convention, being there from start to finish. Going in, I wasn’t sure what to expect. I remember feeling grossly unprepared the first few days but all those emotions quickly faded away.

One thing I didn’t anticipate was the level of board commitment. I didn’t realize how many different events required a member of the board to be present or how many of them were happening simultaneously. However, it did allow me to interact with our increasingly diverse membership population and to serve as an ambassador to those outside of our organization. It also gave me a schedule and a sense of order because without it I probably would’ve been running around like a chicken with my head cut off, because there were so many great panels and plenary sessions to choose from. I did enjoy visiting all the events that my colleagues put on, I was unaware of some of the things they helped orchestrate until the convention so it was nice to see them in their element.

I was really excited to see all the NABJ Students. I created a group chat in December in an effort to facilitate connections and give them a head start on building their networks. I was pleased that the group reached capacity of 500 people during the convention, and that there were still more trying to join. But also that people felt comfortable coming because they were going to be hanging out with their new friends that they met in the group chat. Some students even roomed together. These connections just mean so much to me because, at one point I didn’t want to go to the convention because I didn’t know anyone who was going to be there. Honestly, seeing my students thrive all week at the convention and career fair made every long planning conference call and late night resume critique worth it.

All in all, Detroit was a great experience. I met so many talented people, I was afforded so many amazing opportunities, and learned so much. I’m extremely sad to see it come to an end but I’m glad that it happened.

A list of my favorite events throughout the week:

It is always a pleasure to tell people about the work the NABJ is doing, but to especially talk about what it’s like to be a journalist of color in this day and age. It was also great to talk about what it means to bring 3,000+ journalists of color to Detroit and the impact that would have on the city. I enjoyed visiting the newsroom in Detroit and meeting some of the staff, especially those that are fellow Bison. I was also really excited when I found out that this would be the same station that the Student Project participants would utilize later on in the week to shoot their newscasts.

I had the distinct honor and privilege of planning Training Day (Wednesday), the day of programming centered around students and early career professionals. Training Day seeks to prepare them for not only the convention week ahead but their future in the industry. I did not know what to expect, most of the students I talked to weren’t sure if they would be able to afford to be there for the entire convention, and weren’t getting there until Thursday or Friday. There was also an error on the flyer I made and I wasn’t sure if people were going to come. 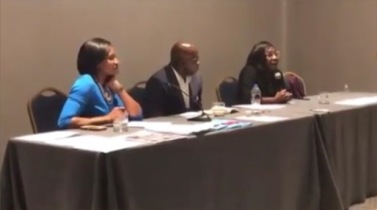 But I actually spent the entirety of the first session constantly moving chairs in the room because some many people were coming. There were so many people, we had to request that the hotel change the layout of the room to accommodate all those in attendance. Which was a good problem to have. I was also fortunate enough to have been asked to sit on one of the panels and share my internship expertise. It was great to give my peers the tips I’ve learned on how to land and be a successful intern.

Training Day was an amazing experience, I’m so excited for next year. I have so many plans on how to make it bigger and better, so stay tuned.

Let me start off my saying, Student Projects is amazing and everyone who participated or served as a mentor is also amazing. The amount of work and dedication that the students put into their work during this week is incredible. I commend them for all the late nights and early mornings that they put in during this week. 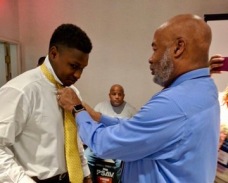 It warmed my heart to stop by their headquarters and see the students collaborating and helping one another. I almost cried when I saw a mentor teach a student how to tie his tie to ensure it looked great every time, I’m probably over exaggerating but it was a beautiful moment to witness.

I also enjoyed just chatting with the students. Getting to know a majority of the student population, like really getting to know them, is a goal of mine. So it was great to talk to students and learn about the things they’ve been doing on campus and their internships as well as their career goals.

As nervous as I was about so many different parts of the convention, I was really excited to have my mom there supporting me. The fact that she traveled to Detroit simply to support me during my first full convention, especially during her birthday weekend meant the world to me. My mom has this essence about her that she just makes everything feel like it’s going to be alright, even when the world is falling apart, her calmness silences all the noise. It was also really great to see her and spend her birthday with her, because God knows when I’ll make it back home again.

I am incredibly grateful that NBC asked me to speak to prospective applicants at the Student Breakfast during the convention. The fact that my current employer thinks so much of me is amazing. I’ve had such a wonderful time as a NBC intern and have been presented with so many great opportunities. I also extremely humbled that I was asked to speak on a program with so many senior leaders of this organization.

Conversation with Chance the Rapper:

Wow. Such an amazing experience to sit at a table with someone you admire. I admire Chance’s realness, his commitment to his community and culture, it’s truly refreshing.

It was great to be in a room with so many other journalists that I admire as well. Just being able to sit and listen to the conversation was a moment of the convention I will never forget.

Also when Chance shook my hand and said he likes my glasses. (Be jealous)

Going into it, I didn’t know what to expect. (I almost didn’t go because I forgot about it, but thank God for the board schedule and that being listed.) Tyler Perry also told about his journey to success and how he deals with haters. He also took her to church with his testimony and in true Southern Baptist fashion prayed us out. It really spoke to taking that step out on faith that could change your life. It definitely left me feeling excited to start some new projects and take a leap of faith. It was a great testimony and motivational speech that I think a lot of people needed to hear.

Founder Paul Brock was the first NABJ Founder that I met and I have taken a liking to him since my first board meeting in October 2017 because he reminds me so much of my grandfather. He is such a kind and wise soul. I find myself hanging on every word when he speaks. Recently, he experienced some health challenges and I wasn’t sure if he would be able to travel to Detroit. But, I was so so excited to see him when I finally saw him. He was in great spirits and even spoke on a panel. He even asked me to see my ‘marks’ from the last semester to make sure I’m doing well, (I don’t know when they were last called marks) but I definitely will be printing out my grades to show him.

Though it was not my first time hearing Rev. Jesse Jackson speak, it was my first time hearing him deliver an address and not a sermon. It was great to hear his thoughts on journalism and the role it’s playing in history. Hearing him speak about the things he’s seen in his life sent, like Dr. King taking his last breaths, sent chills down my spine. To hear him speak about not just having a job but having a mission, also helped me shape my view on journalism as I being to embark on my career and really figure out what I want to do.

I have already dubbed #NABJ19 my graduation party, and the convention kickoff party confirmed that. It’s the reason why I don’t have a voice now, and that’s all I’m going to say on that. It was so great to party and let loose with all the students. I’m already ready to start planning an amazing for students in Miami. Get ready for us, Miami, we’re coming your way. 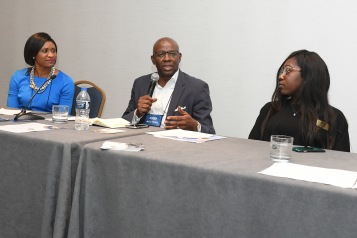 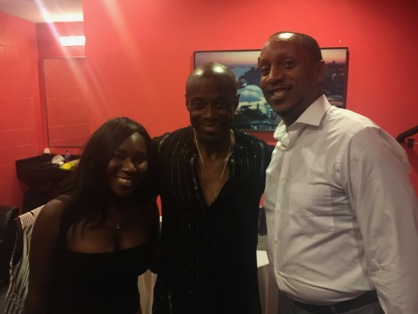 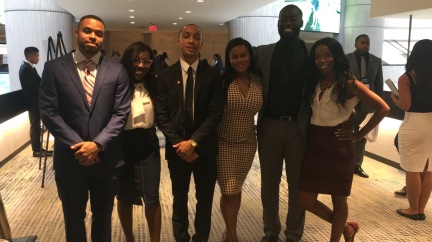 NABJ Student Rep and a group of recent graduates 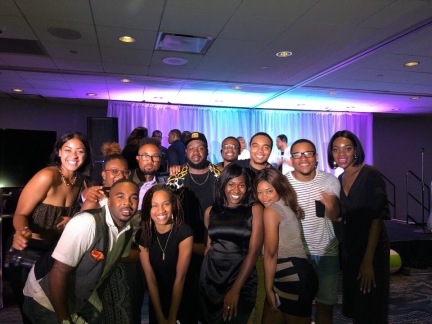 Jasper Bothuel of Detroit and Student Representative, Kyra Azore, dance at the President’s Reception in honor of NABJ President, Sarah Glover, at the Detroit Marriott, August 2, 2018. 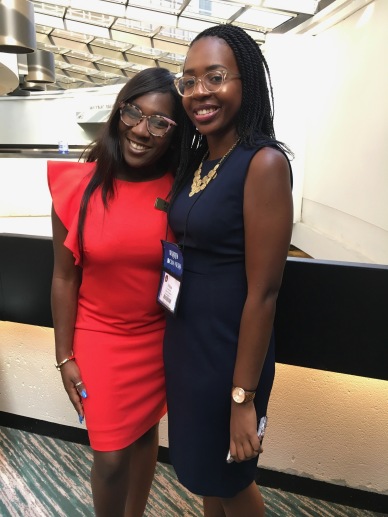 NABJ Board of Directors and Tyler Perry 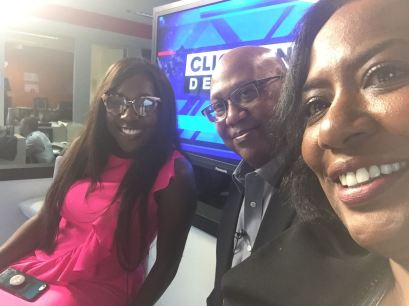 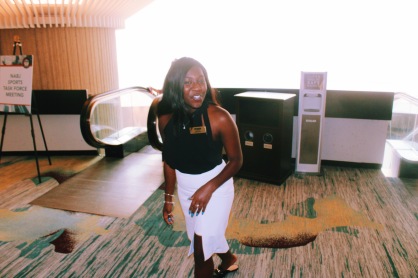 NABJ Board of Directors at the KEM concert 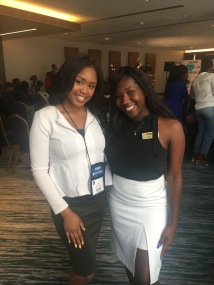